CHASER; Unlocking the Genius of the Dog Who Knows a Thousand Words 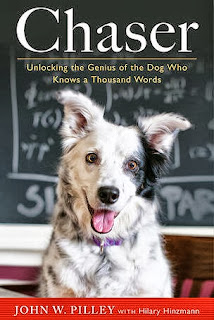 Those of us who have had and loved dogs have known how smart they are. We don’t really question that our dogs understand what we say. We know that eventually we have to spell words like c-o-o-k-i-e and w-a-l-k.  And after awhile only the first couple of letters of the word will elicit a response. That’s the way we pet owners discuss it, anecdotally.  But scientists demand far more proof that the dog actually knows and understands the words that are spoken.  Enter John W. Pilley, psychology Professor Emeritus at Wofford College and his Border Collie, Chaser, whose experience is shared in Chaser Unlocking the Genius of the Dog Who Knows a Thousand Words by John W. Pilley with Hilary Hinzmann.

Chaser entered Pilley’s life in 2004 when his wife decided her husband needed a puppy for Christmas. Chaser was acquired from a dedicated breeder whose dogs are known for their herding skills. From the day Chaser came home with Pilley and his wife, Pilley began talking to her, somewhat in the way a parent would talk to a small child, which is how children learn languages.

While teaching Chaser the basics of obedience, using positive reinforcement, all of Chaser’s learning has been the result of positive reinforcement using play. Pilley began teaching her the names of her toys. Adding to them, and building problem-solving situations into each new level. She has learned the names of over one thousand objects. Yes, you read that correctly.

A study of another Border Collie, Rico, in Germany was not as comprehensive. Rico only knew about a hundred words and the scientists picked apart the study. Pilley, while allowing Chaser to be a wonderful, happy companion, also used games to teach Chaser and to build a scientific study that ultimately could no longer be challenged.  How he accomplished this is carefully laid out in the book.  As a Certified Animal Behavior Consultant, I was intrigued but the nice thing is that this is written in such easy style that any pet owner can read it, enjoy it, and relate to Prof. Pilley and Chaser.  And they can try the same things with their own dog.

Chaser has been seen on television, has been the topic of news reports, but here you get to meet the dog up-close and personal, to see the love and the bond between dog and owner that will be so familiar to dog owners.

Published by Houghton Mifflin Harcourt, there’s no doubt in my mind that this is one of the best books I’ve read in a long time. I think you’ll agree. I highly recommend it. It will be available on October 29th.

See more about Chaser and links to buy the book here: http://www.chaserthebordercollie.com

You are invited to participate in a special #BlogPawsChat on Twitter where you’ll have a chance to win a copy of the book. I hope you’ll join us there on October 22 at 8PM ET.

NOTE: This is a sponsored post for CHASER in cooperation with BlogPaws (‪http://network.blogpaws.com/) however, the opinions expressed in this post are my own. 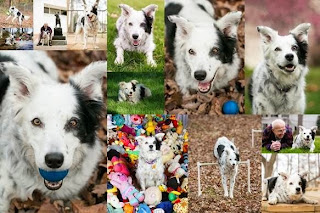 I think you'll love it as much as I did, Layla. I deliberately slowed my reading down towards the end because I hated to see the book end and wanted to savor every word.
As a devoted cat person you know how intelligent cats are. They, too, know what we're saying. But at this point, we can only prove it anecdotally. Who knows what might happen in the future?

Sounds like a great book - can't wait to read it!

It really is, Chris! I think you'll love it as much as I did!

Darlene, this doesn’t surprise me. I know I’ve spoken to you about Peg and her Newfs. I’ve always sworn they understood every word she said to them, as she worked from home and was pretty much with them 24/7. When we first moved to the farm, she and her first boy (Dudley, one of my babies) came over. He was NOT a licker. We were outside, saying goodbye. “Dudley, if you want to get in the car and go home, you have to give Grandma a kiss.” He gave her one of THOSE looks, then walked over to me and gave me a single big schlurp. He then walked to the car door and gave her “Well, I did it. Now let’s GO!” I have NEVER forgotten that example!

Thank you so much for sharing this, Lynne. We know how intelligent dogs are and now their is scientific proof but, personally, I think anecdotal evidence like this tells us what we need to know, scientific community aside. It's so important to learn to read body language!

Thank you! The book is truly wonderful!

Thank you for another wonderful article, Darlene. Whilst we all appreciate the intelligence of our canine companions, "Chaser's" intelligence is remarkable. Having said that, much credit must be given to her human companion for the patience that produced such a result. The book will undoubtedly be both entertaining and informative.

Golden Delight to receive an advance copy too. We just did our post review. Golden LOVE it. Lots of Golden Woofs, Sugar

Thank you so much, Gordon. There is so much to be learned from this book. It's really exciting.

Glad the Golden loved it! Great training in the book! What a treasure it is!

I loved this book, too, Darlene. will be writing about it on Scratchings and sniffings soon but I am so enjoying other posts about it. We agree on the value of the book and I am a firm believer that our Emily, a TreeWalker hound, not only understands much of what we say to her... she wants to talk back to us!

I'm sure Emily is trying to talk to you! Of course, learning body language is essential but I think dogs have been vastly underestimated by the scientific community and Chaser goes a long way in remedying that situation. I'll look forward to writing your blog post on Chaser!