Happy Passover to my readers who are celebrating this week. I suspect many dogs and cats are getting a "taste" of matzo, gefilte fish and maybe a little chicken.

And a Happy Easter to my readers who are celebrating this weekend. Another group of dogs and cats who will be enjoying special treats. Just be sure they don't have an opportunity to eat chocolate which is going to make them sick and can be lethal. Remember that Lilies are toxic to cats. If you must have lilies, make them imitation ones because no "safe" place is really safe from a curious kitty!  Be very careful that neither your dogs nor your cats get anywhere near that pretty shredded plastic that often fills  Easter Baskets.

With a little thought and care your pets can enjoy a safe holiday, whichever one you celebrate!

Now for some exciting news.  You'll remember that last week I told you about The World's Best Cat Litter's new Forest Scent litter. 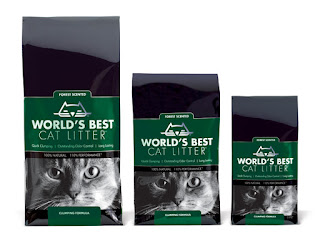 I'm NOT paid by World's Best Cat Litter but they did give me a bag to sample which I shared with my petsitter and she shared with a co-worker, each of whom has a multi-cat household.  Well, now it can be YOUR turn to try it. Thanks to The World's Best Cat Litter, five of my lucky cat-owning readers in the U.S. are going to win a sample of The World's Best Cat Litter Forest Scent!  Just send me a message via my website (http://www.darlenearden.com).  The winners will be announced here on my blog on Monday, April 1st. This is not an April Fool's Day joke - it's the real thing!  I hope you're as excited as I am by this opportunity!  You can't win if you don't enter so get those entries in!

NOTE: This contest is NOT open to other World's Best Cat Litter CATvocates since they have already been given the opportunity to sample the new Forest Scent Litter. 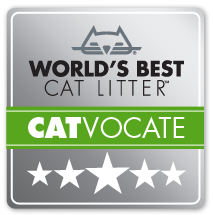 Posted by Darlene at 6:22 PM 5 comments: Links to this post

It's no secret that my cat, Aimee, has been using World's Best Cat Litter ever since I brought her home. She likes, I like it. We're happy.  Although she's an "only" cat in my house I like their Multi Cat formula. Aimee likes it just as much as the original.

Recently, World's Best Cat Litter announced the coming of a new "mystery" litter. I was one of the cat bloggers chosen to test the litter and then write about it, announcing their newest litter to cat owners everywhere.  I thought a really fair test would involve more than one cat.

I gave my sample bag of the (drumroll please!) new Forest Scent to my petsitter, veterinary technician, Mary Slaney, who has two cats and 4 dogs at her house.  She set up an extra litterbox with the new litter and her cats Ike and Huckleberry Pie  known to her friends as Pie, went right in. There was no hesitation about using the new iitter.  Three of the dogs ignored it but little year-old Vinnie, was entirely too attracted to it; he wanted to eat it. His fascination would mean that any small dog living with a cat would have to be prevented from access to the litterbox. You don’t want any dog to have an abdominal obstruction so keep the litterbox inaccessible to any small dogs. For that matter, keep litterboxes inaccessible to larger dogs, too. Dogs tend to surf the litterbox as if it were a buffet.

Mary shared the litter with her co-worker, Nancy, who has several cats.  This would be the ultimate test.  Would more than two be attracted to the litter?  Nancy often uses World’s Best Cat Litter’s Multiple Cat formula and her cats seemed to like the smell of the new litter and used it immediately. The multi-cat homes would, of course, do better with a multi-cat formula.

Mary brought me a small plastic bag of  the litter so I could smell it. The woodsy scent was subtle but apparent, sort of like cedar.  I put it in one of Aimee’s litterboxes, mixing it through with her other World’s Best, and she took to it  immediately.  Aimee loves World's Best Cat Litter.

There seem to be many paws up for World’s Best Cat Litter’s new Forest Scent.  It's available in 6 lb., 12 lb. and 24 lb. bags and should be on store shelves on April 1st.

Disclosure: I am not paid by World's Best Cat Litter. I received a sample bag
to test as reported above. The results of that test are
in the blog post.
Posted by Darlene at 2:54 AM 2 comments: Links to this post

In Memory of Victor Joris

There are some people who come into your life and are so alive, so ageless, so wonderful that they seem immortal. One of those people was Victor Joris.

Dog people will know Victor as a breeder of beautiful Shih Tzu and the author of the ultimate breed books on Shih Tzu. Others will remember him as a respected AKC Judge. He was, in fact, the first person to judge Havanese at Progressive Dog Club's Specialty Show in New York the year the breed was accepted into the AKC's Toy Group. The Toy Dog Club's show takes place every year the Friday before Westminster Kennel Club Dog Show. For years Victor and I would meet in New York and we made sure to spend time together, usually at ringside during judging. I was dashing around getting stories, in and out of the press room and some of the sky boxes at Madison Square Garden.  Seeing Victor was always a breath of fresh air. He was the epitome of the expression: Southern Gentleman.

He was incredibly knowledgable when it came to dogs and he earned my respect long before we met. I distinctly remember watching him judge at Springfield (MA) before we met. I wished I had the nerve to walk up and introduce myself to him but, alas, that took a courage that I lacked at the time. I'm just so glad that we did meet. But I think of the time lost...

Then there was Victor Joris, the two-time Coty Award Winning Fashion Designer. He had worked in Hollywood before he had his own line of clothes and a celebrity clientele list as long as your arm. The name Victor Joris was synonymous with classic, stunning clothes with great attention to detail. He also designed for other fashion houses so you might have purchased something he created without ever knowing it.

I remember during one conversation I was lamenting the fact that I had finally given away the first pantsuit I'd ever owned. It was timeless, with classic lines and in the most stunning shade of grape/wine. Victor listened to me wax poetic about it, telling him the name of the manufacturer, and then quietly told me, "I designed it."  I should have known.

Victor was a remarkable artist who, every year, sketched the ladies at Westminster in their finery for a magazine and then the sketches were auctioned off to benefit a charity.  Imagine my surprise and delight when he sent me the sketch that, unbeknownst to me, he had done of me the first time I emceed The Show Dogs of The Year Awards. He said he hoped I didn't mind but he'd taken artistic license and sketched strappy sandals instead of the more practical shoes I'd been wearing to stand all night. The sketch, with Victor's permission, is on the home page of my website (http://www.darlenearden.com).  It was one of many things he sent me over the years, things that I will always treasure. But more, I treasure his friendship.

He told me stories of his fashion shows, of his dogs, of his adventures in Hollywood and Europe. He had long since retired and returned to his boyhood home in Louisiana but was still active in the dog fancy, although no longer breeding. He was judging and working with his local all-breed dog club.

He had been in and out of the hospital lately. Sometimes e-mails would stop for a bit and then they'd start again. I worried about him but the thought never crossed my mind that my dear friend wouldn't be here. And then, two evenings ago, I received an e-mail from a man who signed after his name, Executor, informing me that Victor Joris had died on Tuesday. I was beyond stunned. How could this be? He was quiet for several days but surely I would hear from him soon. How can the world keep turning without that sweet, wonderful man?  Sadly, we're about to find out.

Victor Joris will always live in a very special corner of my heart.  Goodbye, my friend. May you rest in peace.
Posted by Darlene at 11:14 PM 8 comments: Links to this post

I've been thinking today about feline enrichment and what amuses cats. For their protection, for the safety, we responsible owners keep our pets indoors but that means that we have to find things to amuse them, keep them busy, exercise their minds as well as their bodies.

There are all sorts of toys that we can buy and they are becoming more sophisticated all the time. Just as there are puzzle toys for dogs, there are now food puzzle toys for cats. It makes it more interesting for kitty if he or she can figure out how to get the toy to release those morsels of food, like hunting for food. We love the interactive toys that allow us to play with our feline friends.

They need a scratching post, nice and sturdy to replace the tree outdoors against which they will stretch, which is healthy for them, and scratch off that outside nail that you find at the bottom of the scratching post. A cat tree is always handy for getting away from it all. It's especially nice if it has a closed in type of bed, a nice little hidey-hole for kitty.

How did I get off on this train of thought? I was on a business call today when the thought came into my mind. Well, I really paid attention to it after I hung up the phone. I keep the TV on for "white noise" for me and company for Aimee.  This morning was no different. I had the TV tuned to MeTV, the channel that runs old television shows from the '50s and '60s and '70s, too. Aimee was on my lap with her head turned. She was alert, sitting stock still. It occurred to me that what she was doing was watching The Rockford Files starring James Garner. I realized that it was an action show. Lots of movement, which would appeal to her. She had no intention of stalking the screen but she was giving it her full attention. And then I remember those videos for cats that showed birds flying, etc.  Why should this be any different and why should I be surprised? Especially since I had Yorkshire Terrier who was hooked on soap operas. Really.

I'm not sure if those kitty vids are still available, if they've been transferred to DVD, but it might be worth a look.  Or maybe your cat will like the old action shows on MeTV, too.
Posted by Darlene at 6:51 PM 1 comment: Links to this post