Alice the Pug Puppy Runs Her Own Fund-Raising Marathon! 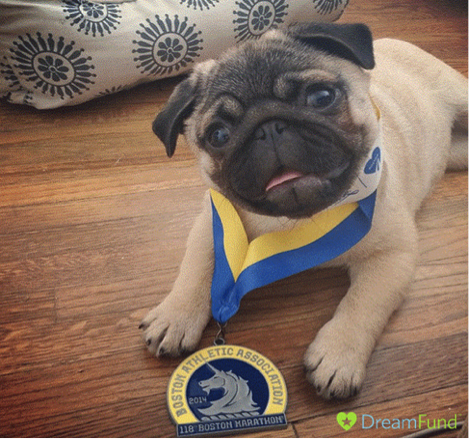 As a Massachusetts native, I can tell you that The Boston Marathon has always been a big deal. Not with me, but with runners. I prefer to stroll but to each his or her own.

Alice, a 6-month-old bi-coastal Pug Puppy is owned by Julia McGovern who is seriously training to run the Boston Marathon. A tad envious, Alice decided to run in her own marathon of all of .262 miles to benefit Pug Dog Rescue of New England (PRoNE).

Just like her owners, Alice must raise $5000. for her non-profit to qualify for a bib. One baby Pug can't do this all alone. She'll need some help from friends and admirers to make Alice's Dream to support Pug Dog Rescue of New England come true. To that end, Alice set up a page at DreamFund.com  You'll find it here:

You can not only donate there but you wan watch Alice's training video as she gets ready for her marathon run.

"When Alice started seeing a lot of traction on her Instagram page I thought, “how can I leverage this highly engaged community (and adorable face) for some good?” I am at the end of my own personal Boston Marathon training and fundraising journey so I wanted use a similar fundraising strategy to help the greater pug community that I’d grown to know and love. Plus, Alice is such a little love bug, I know that if she was a human, she’d embark on a similar charitable campaign to help her pug friends in need!


Alice’s co-owner Rosa and I chose ProNE because it is an amazing organization close to home (we both grew up in MA) and even though we currently live in LA, we love to keep our ties to Boston on a short leash. We also both know people that have rescued adorable puglets from ProNE and seen how much happiness the organization brings to families.

We chose Dreamfund as the fundraising platform because, again, it’s a Boston-local organization and we like to keep in touch with our roots. Plus we love the notion of Alice’s “Dream” being fulfilled to help pug rescues. So cute! And it’s so much more Alice’s personality to “dream” rather than “fundraise.” 100% realize I’m talking about a dog here and not a human.” Ha! Little does McGovern realize she's preaching to the choir when it comes to this sort of thing.

If you've been reading this blog for any amount of time you know that I'm a proponent of Wellness for pets. Usually concepts and treatments go from animals to people but in the case of Wellness it happened the other way around. Wellness for people was adopted by the veterinary medical community. One of the first places to embrace the concept an implement Wellness plans for Cats and Dog was Boston's venerated Angell Memorial Animal Hospital. I literally wrote the book on it, The Angell Memorial Animal Hospital Book of Wellness and Preventive Care for Dogs. Why just dogs? Ask the publisher. It was originally supposed to be two books but they decided not to go ahead with the Cat book. Why? There was a general concept then that cat people don't buy books.  I beg to differ but it's a moot point now.

Here's a sneak peek at the episode:

Posted by Darlene at 2:19 AM No comments: Links to this post

Not long ago I introduced you to Nat Geo WILD's new series, Aloha Vet, starring Dr. Scott Sims who lives and practices in the Hawaiian Islands.  Tonight is the season finale of the show and I don't want you to miss it!

Dr. Sims treats a wide range of animals and you'll see a variety of them tonight.

Posted by Darlene at 12:48 AM No comments: Links to this post 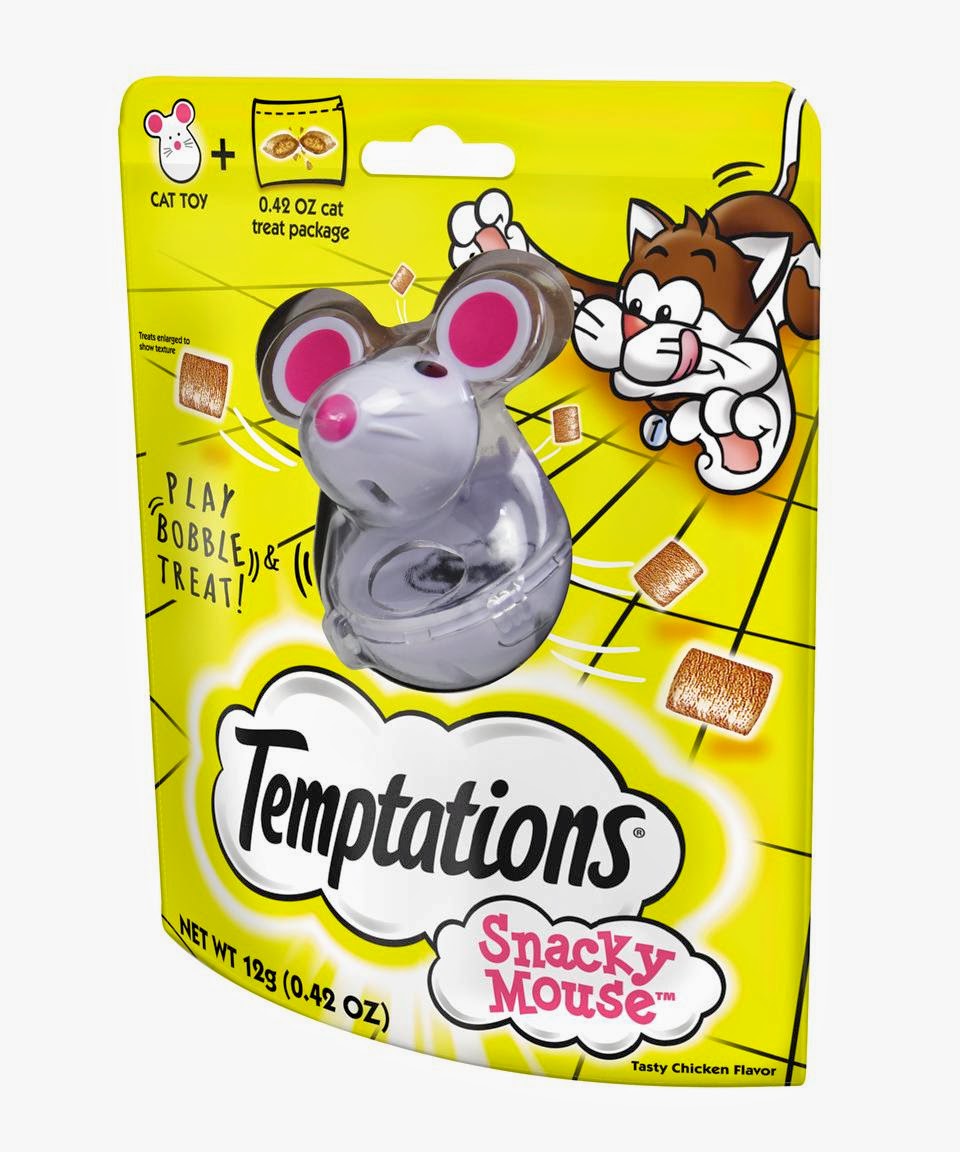 I'm a huge proponent of puzzle, or foraging, toys for pets. They first came on the scene for dogs. As I recall, the first one looked like Rubik's Cube and when pushed around would release treats. It took awhile but finally came the realization that cats are incredibly smart and would be just as happy with a foraging toy as their canine friends. They're probably wondering what took so long!

Mars Petcare's Temptations treats has recently released such a toy and it's readily available in stores everywhere, including supermarkets, mass retail and pet supply stores for a suggested retail price of $6.00.  It comes with a small packet of Temptations treats to get you started. It's just enough to fill the bottom of the toy. There's an opening in the front, in the mouse's tummy.  Kitty pushes the Snacky Mouse around, swatting at it, it rolls and treats fall out. It doesn't take long for your furry companion to figure out how that works.

It's fun, engaging and rewarding for kitty. He has to do something in order to get the treats. Playtime alone has now become more interesting.

NOTE: I received no compensation for this review, just a Snacky Mouse package to test. Testing was done by my 15 year old Chartreux, Aimee, who gave it Four Paws up!

To see how Snacky Mouse works, enjoy the video below:

Posted by Darlene at 9:42 PM No comments: Links to this post

Dogs on Deployment 2015 Military Pet of The Year!

What do you do if you're in the Military, have a pet and are suddenly called up to active duty? Military members nationwide confront a multitude of problems during their careers, and the last thing they need to worry about is their pet's care during their service commitments. In this instance, you can turn to Dogs on Deployment. Dogs On Deployment (http://dogsondeployment.org) is a 501(c)(3) national nonprofit that provides an online network for service members to search for volunteers who are willing to board their pets during their owner's service commitments. Dogs on Deployment promotes responsible, life-long pet ownership for military pet owners by advocating for military pet owner rights, providing educational resources and granting financial assistance for military pet owners during times of emergency. Founded by military members, for military members, Dogs on Deployment aims to provide peace of mind for service members regarding their pet's care. Each year they choose a Mascot, a Pet of The Year.

This year's Mascot, Leonidas, is a 3-year-old Afghan Kuchi mixed breed, born in the mountains of Afghanistan. As a puppy, Leonidas wandered into a United States Army compound and won the heart of U.S. Army soldier, Tim Johannsen.

“The bond created with a dog during war is indescribable,” Johannsen said. “He is my best friend and honestly the way he has changed my life is impossible to put into words.”

Leonidas, like many pets today, has health insurance. Pets Best Insurance Services, LLC, (www.petsbest.com) a leading U.S. pet health insurance agency, which is a sponsor of Dogs on Deployment, a nationwide nonprofit that connects military service members with volunteers to board their pets for free when they are deployed.

A leading sponsor of Dogs on Deployment for two years, Pets Best hopes to bring awareness to the nonprofit’s efforts. In its third year, the nationwide Military Pet of the Year and Dogs on Deployment Mascot Competition resulted in hundreds of contestants, votes and admirable dogs receiving recognition.

Pets Best supports the mission of Dogs on Deployment: to give military members peace of mind concerning their pets during deployment or other service commitments.

The Military Pet of the Year and Dogs on Deployment Mascot receives a free one-year Pets Best pet insurance policy, among many other prizes and benefits. Past winners have received national attention to bring awareness to causes in the military and pet communities. Johannsen and Leonidas plan to use the canine’s new title to raise awareness about rescuing dogs, or “battle buddies,” from overseas, seeking to educate military service members about responsible pet ownership while supporting the Dogs on Deployment mission as a whole.

The Puppy Rescue Mission (http://www.puppyrescuemission.com) is the group that assisted in bringing Leonidas and his sister Mittens to the U.S. to be reunited with Johannsen. Stray dogs and working contract dogs are commonly found in U.S. military compounds overseas and can help service members feel a little more at home.

“If something were to happen to Leonidas in the next year, it is a feeling of relief to know that we will have financial help,” Johannsen said of Leonidas being protected by Pets Best.

Pets Best also protected Midas, the 2014 Military Pet of the Year and Dogs on Deployment Mascot.

“Pets Best recognizes the importance of keeping service members’ beloved pets safe while their owners are away protecting our nation,” said Chris L. Middleton, president of Pets Best. “We remain committed to supporting Dogs on Deployment in its efforts to care for the pets of the brave men and women who serve in the armed forces.”

This is not just an admirable mission but for those of us who love our pets, a completely necessary one. I salute Dogs on Deployment, Pets Best, and The Puppy Rescue Mission for this wonderful endeavor.

NOTE: I received no monetary compensation for this post. It is here to provide information.

Posted by Darlene at 4:15 PM 3 comments: Links to this post

Top Tips to Help Your Pet in An Emergency


Did you know that April is Pet First Aid Awareness Month? I usually write my own posts but the American Veterinary Medicine Association (AVMA) has released a list of the Top Tips to Help Your Pet in An Emergency. Who could give us better advice than the organization to which our Veterinarians belong? Here is their advice:

Accidents happen – sometimes pets get injured, eat the wrong foods, get bitten, cut, or even have seizures.  But, there are ways you can help on the way to the vet. As Dr. Doug Aspros, Former President of the American Veterinary Medical Association (AVMA) says, “You can't be over-prepared. Do your thinking and planning when you're calm - you'll make better decisions when the emergency happens."

So here are a few life-saving tips from the AVMA to help stabilize your pet:

What your Pet First Aid Kit should include for home or travel:
For more life-saving tips from the American Veterinarian Medical Association, log onto www.avma.org/

Posted by Darlene at 12:38 AM 4 comments: Links to this post